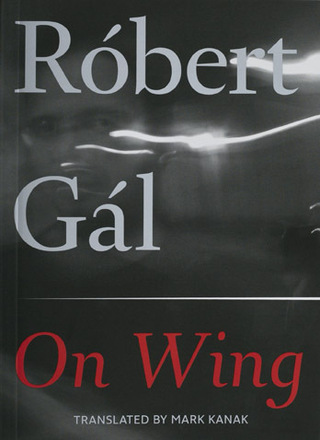 If it was of importance, there is little we know of Gál besides what could be considered superfluous in the grander context of his growing résumé of literary accomplishments: Born in Bratislava, Slovakia; former residences in Brno, New York, Jerusalem, and Berlin; now living in Prague; etc. (Joshua Cohen's article in The Forward, published in May 2005, is one of the best surviving profiles on Gál digitized in recent years.) However, this veil, this absence of the author, provides the perfect milieu in which to engage his work. What we are left with is only the concave of his language: a language like a skeleton—the collagen, not its ivory appearance.

Whereas Signs & Symptoms—published in 2003 by Twisted Spoon Press and Gál's first book translated into English—could be considered, among other things, a manuscript of intellectual existentialism, On Wing relinquishes itself from moral responsibility and surrenders itself to the burden of sense. Here we have a book that borders reality but remains indifferent to the territory in which it resides. [...] People and places, strangers and cities: they serve no function but to exist, and themselves become as ephemeral as memory and as malleable as meaning. They appear, suddenly and some summoned, giving us a glimpse into pasts not intended to be interpreted but, rather, witnessed—realized only as images attached to ideas whose source is never sold, or known: never fully achieved. This is a literature that might have been, unornamented, built by parts removed, not an excessive need to justify itself, and architected with just enough strength to endure. Only a few specters occupy Gál's unreality of anguish: the avant-garde jazz musician John Zorn, whose improvisations are likened to the ability, or preference, "to stay in the center" of that space reserved in the mind for one's illusions, one's awareness of perfection, "as if there was no beginning, always starting as if there were no end;" an omniscient, ubiquitous father; the succubus Lenka K.; Pavel and his family; a bench in Jerusalem.

Corresponding to this "theme"—or, rather, fascination—of metaphysical and terrestrial conflict is the way Gál demonstrates the complexity of interiority: the compartmentalization of collected sadnesses. He writes, poignantly, about paradox and harmony, the exhausting contradiction of self-examination, and how one's search for his/herself, in that suspension of pursuit, truth, is the incarnation of art: the precipice. As such, On Wing ponders the nature of thinking, the choice of contemplation rather than action, the absurdity of hope, and bears life only with glances.

"Memory is always complete up to that point in time in which something is retrieved from it. Then, all words are in queue, shrewdly connected, in a chain of associations that we summarily designate as reality."

"A glance that already knows, because it no longer seeks. An ignited glance, of withered eyes.

" Beneath the hard exterior of Gál's language are infinite, almost savage depths. In the midst of this untamed delirium is what a young Cioran calls "the lyricism of last moments." According to Gál, time experienced internally presupposes eternity. If we are to look at On Wing as a confession of sorts, we might conclude that an eternal state can only be accomplished by an intensification of subjective emotion.

Gál rejects literary canon, the traditions of belles-lettres. Nor is he persuaded by power, politics, or, in a way, transcendence: the beyond. His concern is form, not communication, content, or—need it be said?—narratives driven by story or plot. Like a painter, Gál values construction, craft and invention; he revels in the ecstasy of style. Alain Robbe-Grillet, who is perhaps most recognized for his attack on Balzac and signification and—arguably due to the influence of Barthes' "Littérature littérale"—his theory on the autonomy of objects, writes, in his seminal collection of essays Pour un Nouveau Roman: "the necessity a work of art acknowledges has nothing to do with utility... the work must seem necessary, but necessary for nothing." Let us put to rest the debate of form and substance, our ideas of what constitues "good" literature. On Wing is a book of opaque beauty. A coda of what gives us comfort. A reimagining of silence. A book that breathes, that lives and dies but never ends, meant to be read without expectation, and read over again.